Q
What is blue-light?
A

Light is made up of electromagnetic particles that travel in waves. These waves emit energy, and range in length and strength. The shorter the wavelength; the higher the energy. The length of the waves is measured in nanometers (nm), with 1 nanometer equaling 1 billionth of a meter. Every wavelength is represented by a different colour, and is grouped into the following categories: gamma rays, x-rays, ultraviolet (UV) rays, visible light, infrared light, and radio waves. Together these wavelengths make up the electromagnetic spectrum.

However the human eye is sensitive to only one part of this spectrum: visible light. Visible light is that part of the electromagnetic spectrum that is seen as colours: violet, indigo, blue, green, yellow, orange and red. Blue light has a very short wavelength, and so produces a higher amount of energy. Studies suggest that, over time, exposure to the blue end of the light spectrum could cause serious long-term damage to your eyes.

Blue light has a wavelength of between approximately 380nm and 500nm; making it one of the shortest, highest-energy wavelengths.

Q
Where is blue light found?
A

②they have a background light kits, through the strong flow of electrons excited by the light source, contains an abnormal amount of high-energy blue light. 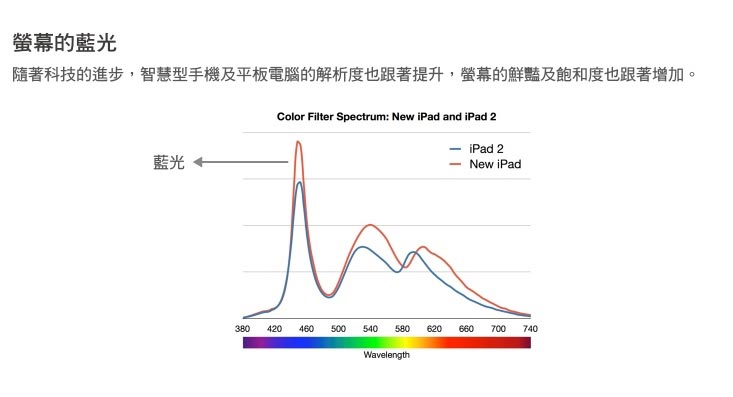 Q
What are the effects of blue light exposure on our health?
A

Blue light can help elevate your mood and boost awareness, but chronic exposure to blue light at night can lower the production of melatonin, the hormone that regulates sleep, and disrupt your circadian rhythm.

Harvard researchers have linked working the night shift and exposure to blue light at night to several types of cancer (breast, prostate) diabetes, heart disease, obesity and an increased risk for depression.

Researchers aren't exactly sure why exposure to blue light at night seems to have such detrimental effects on our health, but it is known that exposure to light suppresses the secretion of melatonin and lower melatonin levels might explain the association with these types of health problems.

Optometrists are even seeing high levels of retinal stress in young people that could lead to the early onset of macular degeneration, which in extreme cases can cause near blindness.

Q
How to reduce harmful of blue light?
A

Most of us spend the majority of our waking hours staring at digital screen, whether it's the computer at work, our personal cell phone, playing a video game, or just relaxing and watching TV. Digital eyestrain is a new term used to describe the conditions resulting from the use of today's popular electronic gadgets. Everyone needs to take precautions against the effects of blue light. Whether we work in an office or play in the sun; spend hours staring at a computer screen or texting on our cell phones, we are all being exposed to blue light.

You can choose anti-blue light screen protector (yellowish/Lt. orange) which is effective in reducing blue light that from smart phone, tablet pc, LED screens. Taiwan Ophthalmologists Ye Wei Yi (葉威毅) said: "Regarding the impact of the spectrum, colors like yellow, orange, light orange, are better to cut off blue light, and image contrast can be increased at the same time." However, the most important thing is to take 10 minutes break while staring 30 minutes on screens.

The latest research in the past decade has found that blue light with a wavelength of 400-500 nanometers in human visible light harms the eyes the most. Its chronic cumulative exposure or acute large-scale exposure may cause retinal pigment epithelial cell death and macular Department of lesions. (Source: Dr. Zhang Zhengzhong Ophthalmology)

Blue light has proven to cause severe damage to the eyes, because blue light is closest to ultraviolet light and has the highest energy ... (Source: Hualien Hospital, Department of Health, Executive Yuan)

Blue light is high-energy visible light with a wavelength of 400-500 nanometers. It can penetrate the lens to the retina, cause optical damage to it, and accelerate the oxidation of cells in the macula. Therefore, blue light has been proven to be the most harmful visible light by research. (Source: Fu Yanjiang, Director of Ophthalmology, Beijing Hospital of Traditional Chinese Medicine, Capital Medical University)

On even ordinary homes, the blue light emitted from the screen of a smart mobile device such as LCD TV, gaming devices, and tablet terminal is used.
It is widely affected from children to adults that generation has grown up using devices technology.
So far, it can be said that this is the first time in human history lift styles to stare at artificial light for a long time.

Q
What is the mobile night view function?
A

When the night view function is turned on in the phone, this dark mode method only changes the background brightness to reduce the energy consumption of the OLED. Which increases its service life and adjusts the color of the visible content. This raises the question why do we need to block blue light? The blue light problem is not actually solved by the screen. 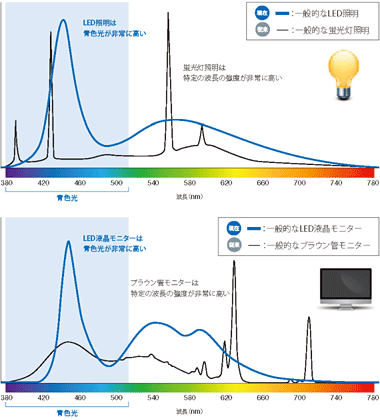 The "blue light" has a short wavelength, and it is easy to hit the dust and moisture particles in the atmosphere. This results in scattering of light creating a glare which then affects the visibility of the screen.

The statements above relate to general lighting from mobile phones, TVs, computers, or any light display you are exposed to daily. In order to increase the brightness, these light sources emit a large amount of blue light due to the natural material found in (OLED). OLED uses the physical characteristics of polymer materials to directly emit RGB (red, green, blue) three primary colors after application of voltage to form white light. Therefore, the official statement about making the eyes feel comfortable does not mean that they have eye protection. In other words, the dark mode does not protect the eyes. Users may also see inconsistencies due to changes in screen light contrast.

① Shown by research that FL-41can filters out certain wavelengths, FL-41 colored glasses have many proven applications for migraine headaches and other photosensitive conditions related to photophobia. (FL-41 is a type of specialty eyeglass shade designed for people with light sensitivity).

② The ROSE PINK color is very similar to FL-41 in terms of spectral transmission, and can be used as a blue light block in mobile phone screen and film applications.

The four features of protective screen and protective film products are